A Zen monk in the late Edo period, poet and calligrapher.
His secular name was Eizo Yamamoto.
Became a monk at 18 and underwent rigorous training.
At the age of 34, traveled to districts in Japan for further training.
Without managing a temple, relied on charity and begged daily.
Was conversant in the Shingon, Jodo and Nichiren sects as well as Shintoism.
Died in 1831 at the age of 74.

A Zen monk in the late Edo period, poet and calligrapher.
His secular name was Eizo Yamamoto.
Became a monk at 18 and underwent rigorous training. At the age of 34, traveled to districts in Japan for further training.
Without managing a temple, relied on charity and begged daily. Was conversant in the Shingon, Jodo and Nichiren sects as well as Shintoism. Died in 1831 at the age of 74. 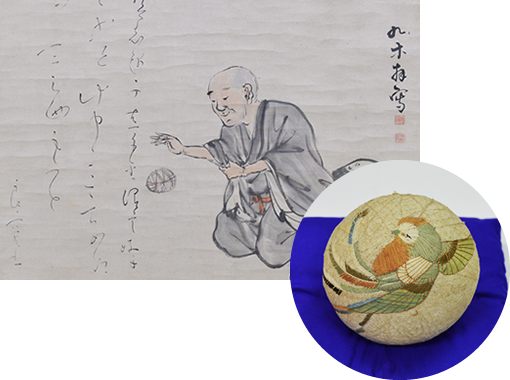 Ryokan was born into the prestigious Yamamoto family that ran the Tachibanaya business, a shipping agency, while the father was also a town administrator, in 1758 in Izumozaki, Echigo (Present Izumozaki-machi, Mishima County, Niigata Prefecture).
His childhood name was Eizo. He was the eldest son among four boys and three girls. His father Yasuo was a head administrator for the town, serving as the chief priest at Ishii Shrine in the town as well as working as a haiku poet with the pen name of Inan.
Eizo took lessons at Sanpo-kan House, a school of Chinese classics scholar Shiyo Omori in Jizo-do (Present Bunsui, Tsubame City) from the age of 7 and eagerly studied Chinese classics.

However, Eizo, who had become an apprentice administrator at the age of 18, suddenly started to live in Kosho-ji Temple (Soto sect) in Amaze and shaved his head to become a monk.
When Eizo was 22, Kokusen Osho, the chief monk of Entsu-ji Temple in Bicchu Tamashima (Present Kurashiki City, Okayama Prefecture), visited Kosho-ji Temple. Here, Eizo entered the Buddhist priesthood and was given the Buddhist name of Ryokan.
Ryokan was impressed by the noble character of Osho Kokusen and trained at Entsu-ji Temple for about 12 years. After he received a Gatha certificate, which acts as a diploma for Zen priests, he went on a pilgrimage to districts in Japan.

Ryokan returned to Niigata in 1796. Starting at the age of 47, he spent about 20 years at Gogo-an Hermitage in kokujoji Temple on Mt. Kunigami (Present Tsubame City).
Then he moved to a thatched hut in Otogo Shrine at the foot of Gogo-an Hermitage and lived there for about 10 years.
He left Mt. Kunigami in 1826 and moved in with the prestigious Kimura family in Shimazaki (Present Nagaoka City).
He met Nun Teishin, and in his late years they exchanged heartwarming poems that they each wrote. He passed away in the Kimura household in 1831 at the age of 74.

Ryokan’s religion was the Buddhist Soto sect. He followed the teachings of Kokusen Osho and Sect Founder Dogen faithfully. He did not manage a temple for his lifetime and did not have a wife and children. He devoted his entire attention to material nothingness, holding on to the principle of honest poverty.
Ryokan's works are mainly his own poems including square, semi-cursive, cursive and kana style calligraphy and letters which are highly praised as the best Japanese style and ultimate Japanese beauty. He wrote about 100 haiku poems. Some are well-known worldwide such as "Wind carries in fallen leaves enough to burn.” The hidden meaning is that heaven gives us enough materially.
He bounced balls and played hide-and-seek with children, leaving many anecdotes.
Everyone from children to adults loved him.Ryokan’s humanity integrating Zen, poems, haiku, writings and anecdotes is revered by many people.

Tsubame City is where Ryokan moved in to settle for a long time after his strict training and pilgrimages. Gogo-an Hermitage, a thatched hut in Otogo Shrine and the house of the Nakamura family, where Ryokan lodged when he studied at the school of Shiyo Omori, are there. The houses of the Abe, Kera and Harada families who supported Ryokan and were good friends through his poetry are also there. With historical sites related to Ryokan and monuments engraved with his poems dotted here and there, you can touch Ryokan’s heart and his sensitivity here.

At the Pine Tree,
Viewing the moon (Tsukimi-no-Matsu)

When Confucian scholar Kameda Bosai was visiting at his hermitage, the sake ran dry and Ryokan went out to buy more… but he did not return. Bosai went to fetch him—and found him sitting on the roots of a nearby pine tree, gazing at the moon. Ryokan had forgotten about the sake, and was lost in Buddhist reverie.

Ryokan was aware of a bamboo shoot growing tall in his outhouse, soon to hit the ceiling. Feeling love for the shoot, Ryokan lit a candle with the intention of burning a small hole in the thatched roof, to give the shoot room to grow. Instead, he burned the outhouse to the ground. Through this story, we can learn his compassion for all living things.

Moving the Heavens for a Child
(Tenjo Okaze)

Having finished his daily mendicant rounds in Tsubame, Ryokan came to the weir at the Nakanokuchi River, where children were flying kites. A child approached, asking him to write a message on a piece of paper he wanted to use for a kite. Delighted to please a child, Ryokan wrote―in beautiful calligraphy that survives to this day―four characters requesting strong winds in the heavens:
天上大風(tenjo okaze).